Pakistan has struggled for years to reform its economy and develop a sustainable strategy to achieve economic growth. These struggles have been exponentially aided by the expanding IT sector, population growth, and the increasing numbers of internet users. The development of eCommerce businesses in Pakistan had tremendous effects on the country’s economic growth and with the passage of time, it has been growing even further.

In the country, most stores gain sales through their eCommerce platform or mobile web store. It is one of the many things that have exceptional potential and will ultimately improve and grow. However, Pakistan is still way from being able to use digital money for online purchases and make it the preferred method of payment. The current government proposed a framework naming Ecommerce Policy in 2019 to boost the online selling industry. But to date, it is still not fully implemented in its totality. The critics stated that it lacks privacy statute of the general application nor has national consumer protection. 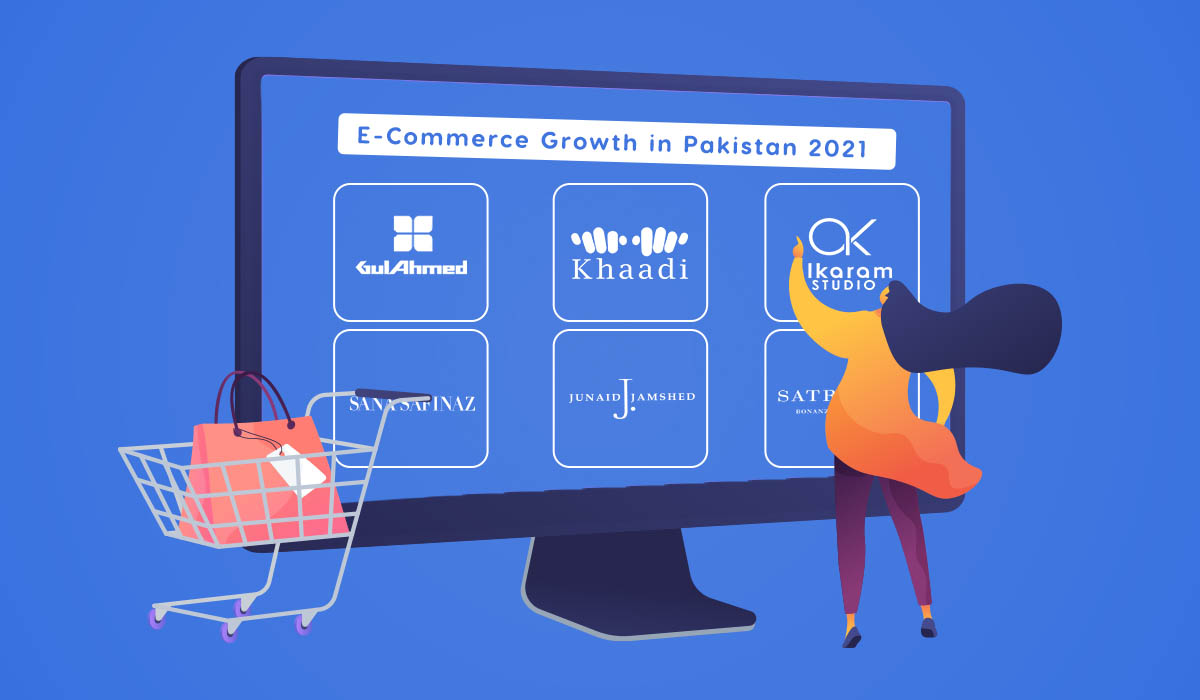 Gul Ahmad Shop is Pakistan’s largest market player, generating $62 million in revenue last year. The revenue for 2021 has not yet been released. Gul Ahmad is followed by Khaadi with a revenue of $51 million and Limelight with $36 million as the second and third biggest players in Pakistan. We compiled this online ranking by taking into account the ranking of every store that generates revenue in Pakistan.

Depending on the store, they may be able to deliver products throughout the country or around the world. The ranking here, however, is based on revenue generated in Pakistan. Pakistan’s fastest-growing eCommerce store is beoneshopone.com, which generated around $4.9 million in sales last year. By 2020, the store’s revenue is expected to grow by 136%. 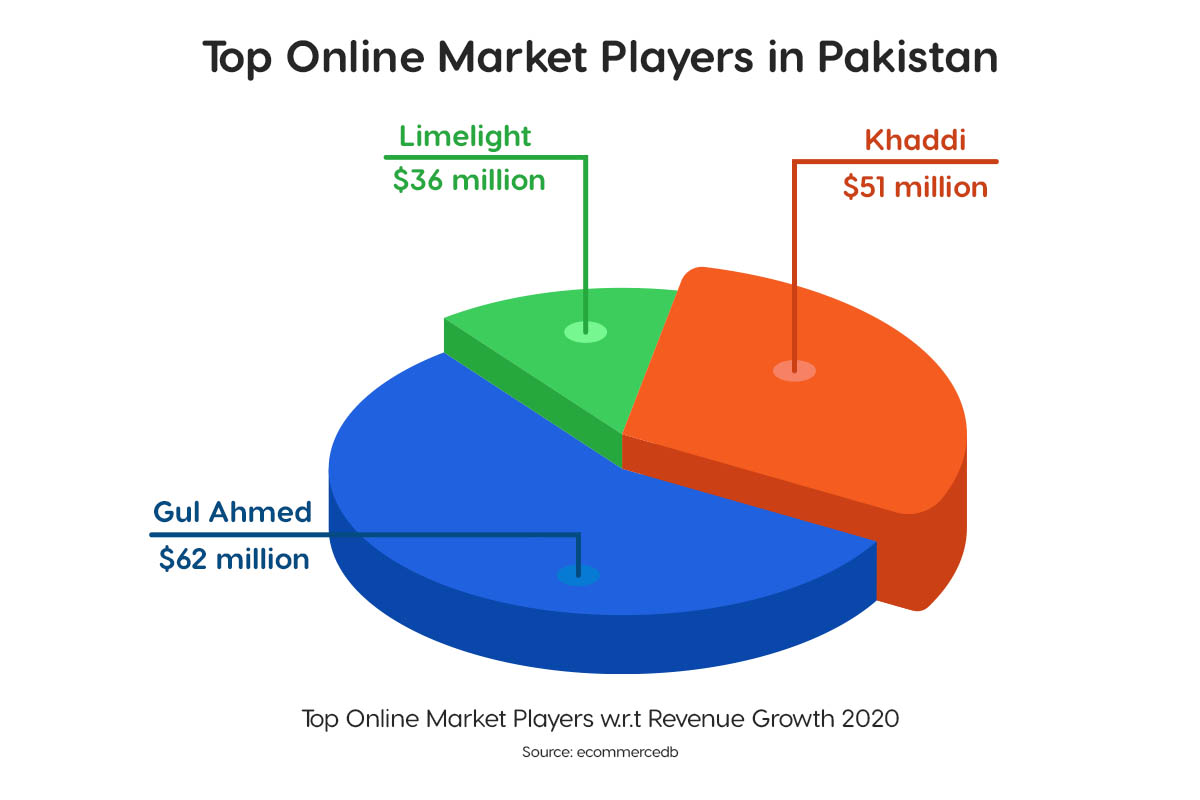 We have listed the top eCommerce markets in Pakistan based on the revenue growth rate below. Based on the data provided by companies, the following data is from 2020, since information about the current year has not yet been released. Limelight.pk topped the group with its highest revenue growth rate of 87.1%, while gulahmedshop.com and khaadi.com came in second and third, respectively, with 80.1% and 56.9%. 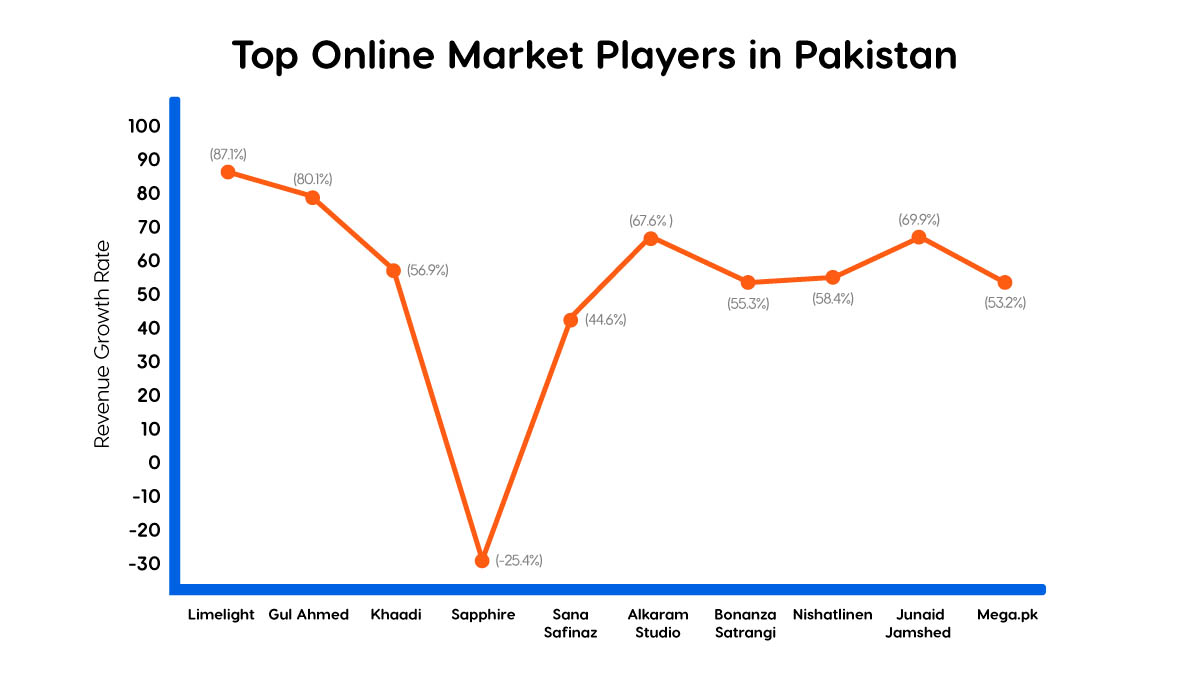 Pakistan’s Largest Ecommerce Markets Based on their Social Media Presence

In Pakistan, social media plays a crucial role in business growth. We will look at these top online markets based on how many followers they have on social media and how many likes and comments they get. In light of Instagram’s prominent position in social media and its effectiveness as a result of online businesses, we have compiled this list according to Instagram followers. Khaadi has the most Instagram followers, with 4.4m, Junaid Jamshed is second with 2.7m, and Sapphire Pakistan is third with 2.5m.

Top Pakistani Ecommerce Players Based on Their Web Searches

A website is also an important factor that impacts e-commerce businesses significantly. When a website is attractively designed and SEO-optimized, one can attract more organic visitors to their website, which eventually leads to more sales. Check out these top market players and see how a website presence helped them get a top ranking in the eCommerce market.

Ranking of Ecommerce Market Giants in Accordance With Google Ratings

Among Pakistani e-commerce business owners, Google reviews are more important than social media reviews like Facebook. Google uses a rating range of 0 to 5 where a rating closer to 5 indicates a high reputation and a rating closer to 0 indicates a low reputation. The following table contains a list of all these top performers in Pakistan’s eCommerce market, based on their Google Reviews. As there are many outlets available for these brands, we used Lucky One Shopping Mall as a benchmark for this ranking. Lucky One Shopping Mall is the biggest shopping mall in Pakistan and is situated in Karachi. 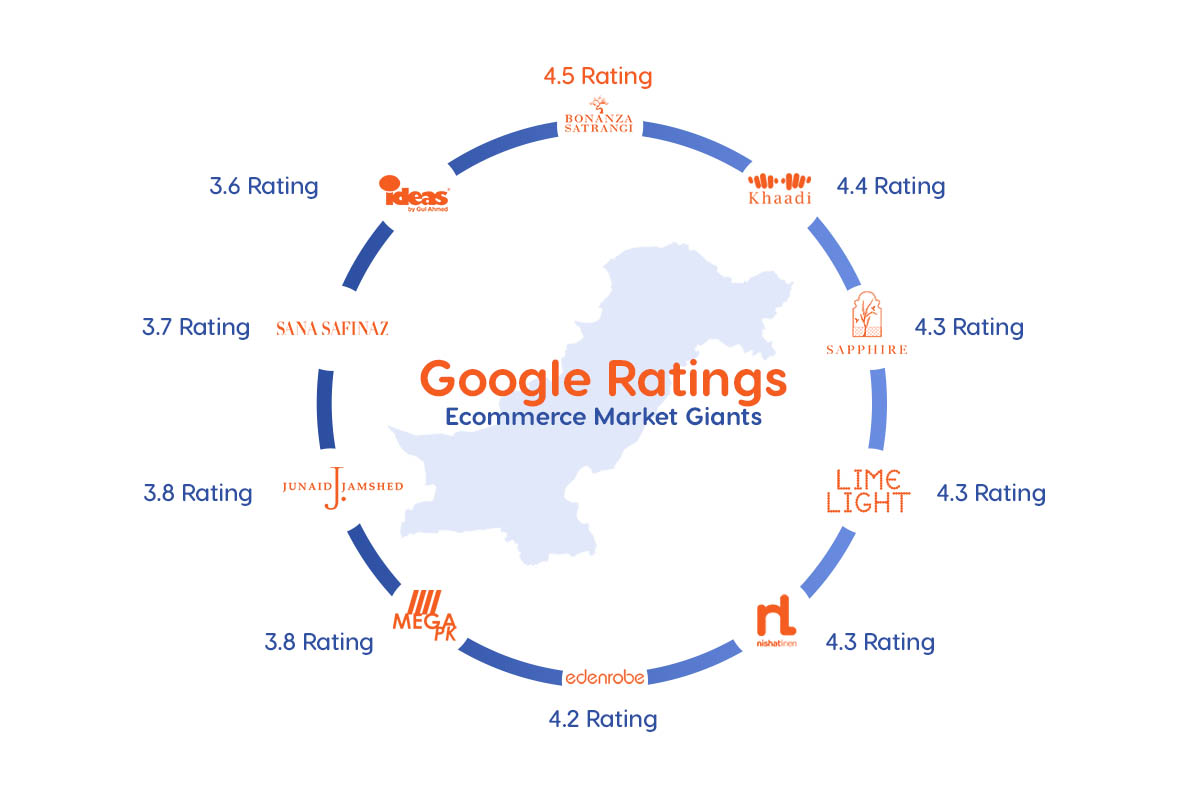 Ranking of Ecommerce Market Giants in Accordance With Google Reviews

It is expected that Pakistan’s Ecommerce market will grow even more over the next few years, based on Statista Digital Market Outlook. According to the data, the compound annual growth rate is expected to rise by 18% in the next four years. This decline shows a moderately flooded market compared with the growth of 90% year by year. Furthermore, Pakistan’s 19% online penetration rate is also an indication of a moderately saturated market, meaning that 19% of the Pakistani population bought something online within the past year.

Ecommerce marketing in Pakistan can broadly be classified into five categories. In Pakistan, 68% of e-commerce revenue comes from fashion, making it the largest segment of the industry. 13% of the total is made up of Electronics & Media, 10% by Food & Personal Care, 5% by Toys, Hobby & DIY, and 4% by Furniture & Appliances.

The scholarly article concludes the top market players in Pakistan’s eCommerce industry. Based on revenue growth, Fashion/Clothing is taking over the entire eCommerce market of the country, as we can see by the fact that approximately 47 of the 50 largest eCommerce sites are in the clothing category. We analyzed these players based on various factors such as Social Media Performance, Google Reviews, and Web Searches. In Pakistan, therefore, eCommerce marketing is essential for every service, especially eCommerce businesses. Tashheer Digital is the top digital marketing agency in Pakistan offering a variety of marketing services at competitive prices. Request a free evaluation of your eCommerce business today by giving us a call.